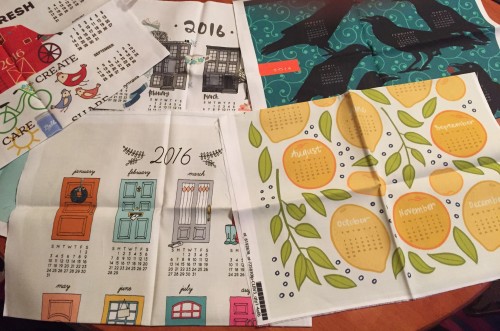 This is an easy project to welcome in the New Year. I bought these tea towels online from Spoonflower. They aren’t actually towels yet in this photo because the fabric edges are raw and fraying. If you click on this Spoonflower link you will see that there are an amazing number of design options and they are all so colorful and fun.

I made my fabrics into tea towels (described below), but my friend, Anne, made hers into adorable (and reversible) tote bags using this YouTube tutorial by Alanda Craft. The tutorial does not describe using a towel with a one way design such as these calendar towels. To have both sides of the bag facing “right side up”, you have to make a cut down the middle, reposition and sew back together. 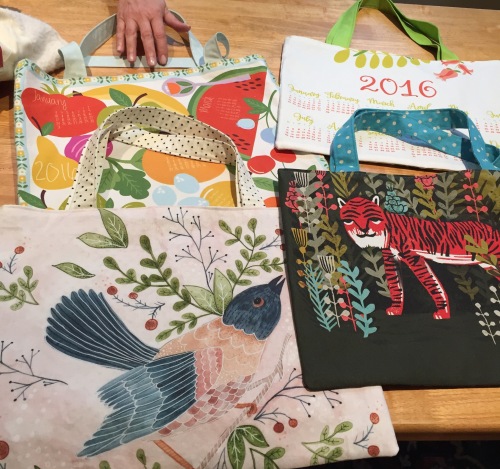 Tote bags made from calendar fabric.

All I had to do to make the towels was to trim the edges, iron 1/4″ towards the back once and then again, and then sew in place.

Sewing this edge was made easy with an edge stitch foot and my needle position changed slight to the right of center. As I sewed around all of the edges (from the back of the towel), I did add in a piece of twill tape to one corner to allow the towel to be hung over a hook if desired.

Twill tape in the corner makes the towel able to be hung on a hook or knob.

Due to the bulk of the folded edge, I did have trouble getting my sewing machine to grasp and move the towel forward as I began sewing. This is what the Bernina height compensation tool is for. 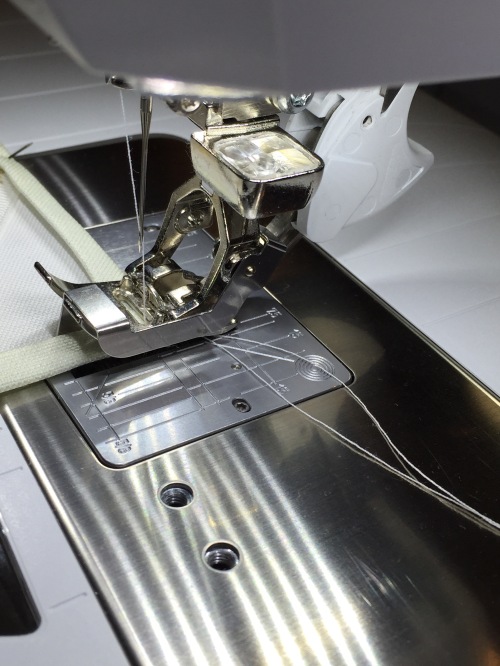 Presser foot slanted up in the front causes feed dogs to not be able to advance the fabric.

In this next photo I have inserted the tool under the back of the foot (behind the start of the towel edge) which has leveled the presser foot and enabled the feed dogs to move the fabric. 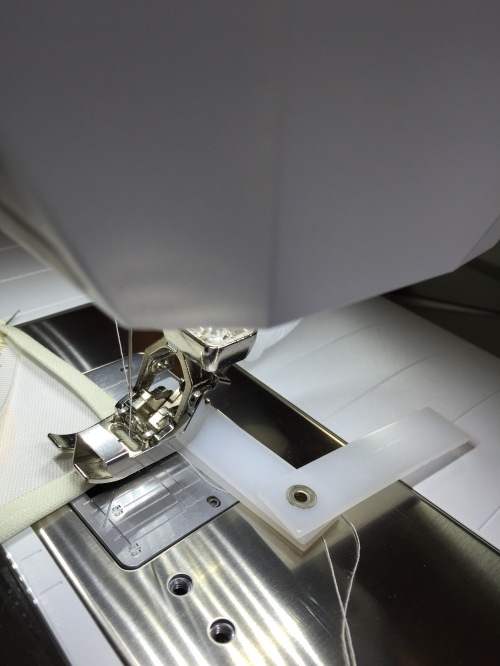 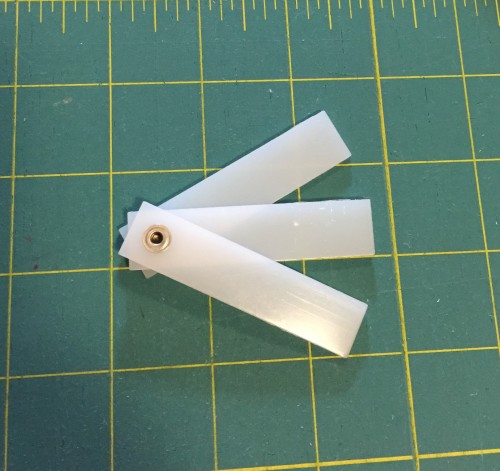 This tool has a swivel holding the 3 layers together which allows you to use 1, 2 or all 3 of the layers to get different thicknesses depending on what you’re sewing. I used 2 layers for these towels. 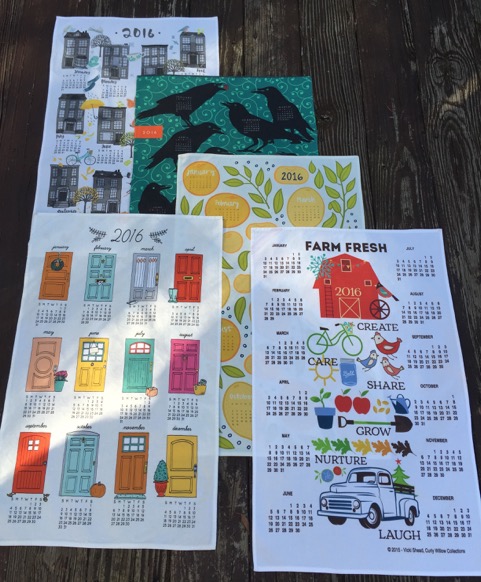 This was a fun project and makes a lovely gift. This cotton/linen fabric is fairly stiff when you receive it, but a quick wash turns it into a nice soft towel. I finished the edges before washing to prevent a lot of fraying that would have happened in the washer and dryer. 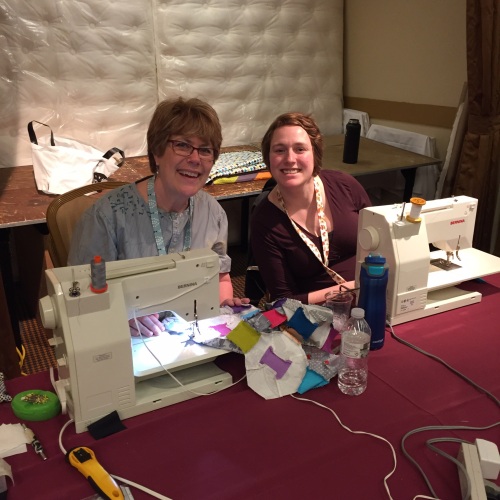 Lindsey and me at Sewtopia

My daughter, Lindsey, and I spent this past weekend at a sewing event called Sewtopia which was held in Chicago. Sewtopia is a 3 day sewing retreat for the online sewing community which occurs 2 times a year in different places around the country. During the Spring retreat the focus is on education and we had 2 fabulous instructors!

Latifah Saffir and our sewing space at the Drake Hotel

Latifah Saffir traveled from Los Angeles to teach us her Molehill Quilt design which is all curved piecing. The curves are rather long and shallow and sewing them was a breeze after Latifah gave us tips and showed us how to sew them.

Did I mention that Lindsey is pregnant? 37 weeks pregnant to be exact. She lives in the Chicago area and so did not travel out of her usual stomping ground to attend this event which we had signed up for longer than 9 months ago. She and Latifah are both engineers and Lindsey could really appreciate the engineering that went into this quilt design.

The final layout was decided.

The “Molehills” are all made and then some of them are cut and repositioned such that you end up with a rectangular quilt with straight edges made from all of those curves. You have to admit, that is some engineering! The name comes from a play on the saying about “not making mountains out of molehills”. These arcs are large (24″ wide) but not tall and so they are definitely more like molehills than mountains. This pattern is due to be released by Latifah later this week. Click here to go to her website.

I did a fair amount of prep work for a Molehill quilt top of my own but wanted to spend more time figuring out a layout. I decided to help Lindsey construct her blocks so that we would get to the assembly while the instructor was still available to guide us. So . . . I don’t have any molehills of my own to show right now.

The following day we had Rita Hodge from Red Pepper Quilts who came all the way from Melbourne Australia to teach us how to piece Y seams to make the Kansas Dugout block. This block is sewn together using many, many, many, Y-seams. Did I say “many”? No exaggeration! This looks rather simple but was like putting a puzzle together. 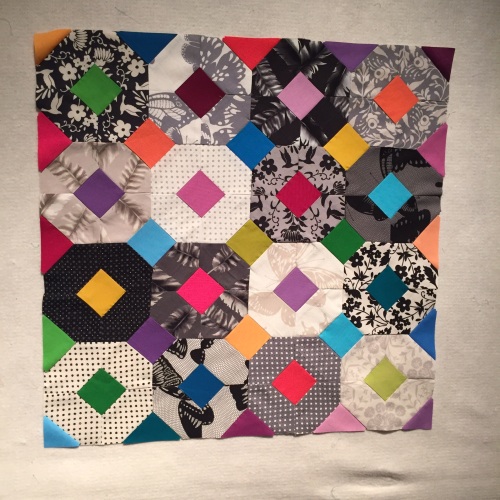 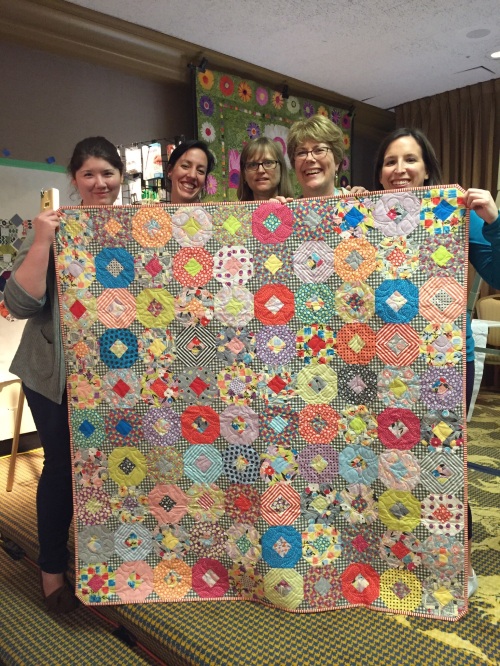 DCMQG members with Rita Hodge (in the middle)

The photo above is Rita’s quilt which is made up of 100 Kansas Dugout blocks. The templates for this block in 3 different sizes can be found on her website here and sewing directions are on her blog here.

The attendees of Sewtopia Chicago where issued a sewing challenge several weeks before the event. We were each sent 6 pieces of Michael Miller fabric and asked to create something quilted from them and bring it to the event to be shown all together and a few would be chosen by judges to win prizes.

You could add other Michael Miller fabrics to your piece. Lindsey ended up making a pretty large quilt. We were sewing the binding down right before we went to the opening registration where we had to turn our items in.

Some of the items entered into the Michael Miller Fabric Challenge

My entry was the Dragon Fly quilt pictured above (and below) with just a few of the the other entries.

During lunch the day of the judging the attendees requested to vote on their favorite of the challenge items and the staff agreed and made it happen. Guess which quilt won “viewers choice”? Mine! I thought the dragonflies were pretty cute, but it sure was great to know others did too. It is a paper pieced pattern by Amy Friend that can be found here.

I do not have photos of the items that won the judging. If the Sewtopia people post photos of them later I will edit them in. The winner made a bag with amazing piecing and the words of the song “Over the Rainbow” free motion quilted into it. Second place was a fabric iconic Airstream trailer and 3rd place was an adorable rag doll.

There were many other wonderful sponsors for this event including Bernina who provided sewing machines for many of the participants, Pellon who provided rolls of batting and Reliable who provided irons. The organizers and staff were all truly amazing. 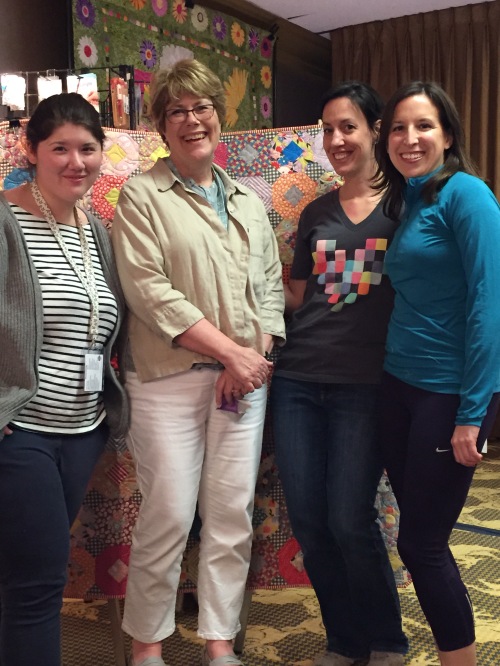 I had so much fun with these ladies!

I didn’t realize there would be other DC sewers at the event, but found that there were 3 others when I got there. Kristina on the left above has moved to Chicago is now a student at Northwestern University. Stephanie and Lauren flew in from DC for the event and it was such a pleasure to get to know them better.

To say that it was a wonderful weekend is such an understatement that it seems stupid to even say it. I sewed, I learned new things, I met new people and I was with my daughter who lives much too far away from me and who’s life is about to change forever. I feel as though I’m the luckiest woman alive. To top it off – I’m going to yet another retreat this coming weekend! Mid Atlantic MOD will be happening in Lancaster, PA and I will be there with many of my friends (some feel like daughters) from the DC Modern Quilt Guild. I can’t wait!