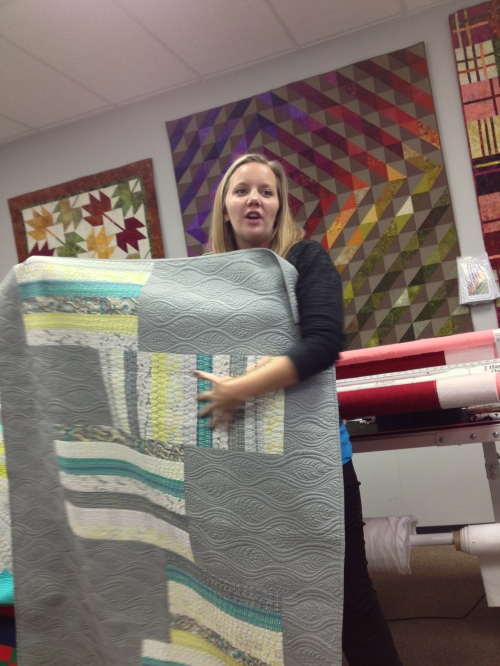 Angela showing one of her quilts.

I had the extreme good fortune this past week of hosting Angela Walters in my home while she was in the DC area giving lectures and a workshop to the two quilt guilds that I belong to. She is a long arm quilter who’s work is so exquisite that many of the modern fabric and pattern designers (Tula Pink, Jacquie Gering, Cherri House to name a few) ask her to quilt the quilts they are going to display at market to sell their designs. See her quilting portfolio here.

Angela quilted this quilt that is on the cover of Tula Pink’s book (and all of the quilts inside).

My traditional guild, The Needlechasers of Chevy Chase, brought Angela to the DC area to give a lecture and a workshop. DC Modern Quilt Guild got to take advantage of her being in town and scheduled a lecture as well. When I asked Angela which type of guild she normally speaks to, she said that she enjoys to speak to both traditional and modern guilds and considers herself “bilingual”. She also has a theory that the two groups are getting closer together and that as the younger modern quilters gain more sewing experience, there will be less and less difference between them. I found this to be very interesting and hope that I am not misspeaking what she said about this. 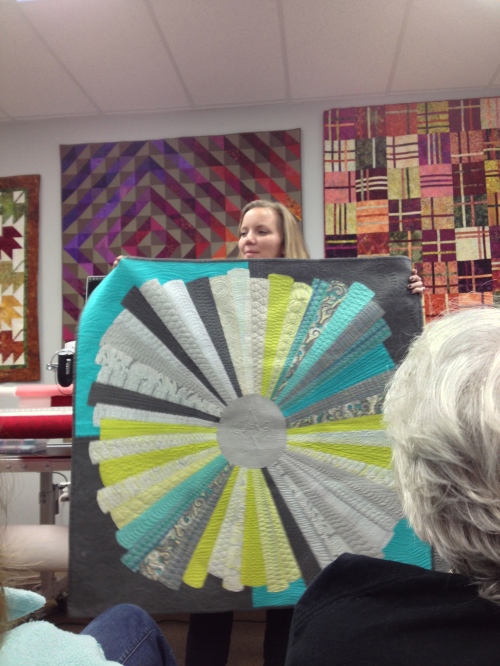 I think that the take away message that Angela gives when she teaches is to not let free motion quilting intimidate you. Have fun with it! She learned to quilt on a long arm machine without any preconceptions of what the quilting should look like. She had hand quilted before she got her first long arm machine. She didn’t know at the time that it was possible to quilt on a conventional sewing machine. (Lucky her!)

There is no doubt that she loves to quilt and she wants everyone else to love it too! Her website is www.quiltingismytherapy.com. There are links there to her blog, to video tutorials, to free quilt patterns, to her shop and to where she’ll be teaching next. If you are not lucky enough to catch her in person, she currently has four Craftsy classes on free motion quilting which surely must be the next best thing – or even better because you can pause it and play it over and over while you’re practicing. 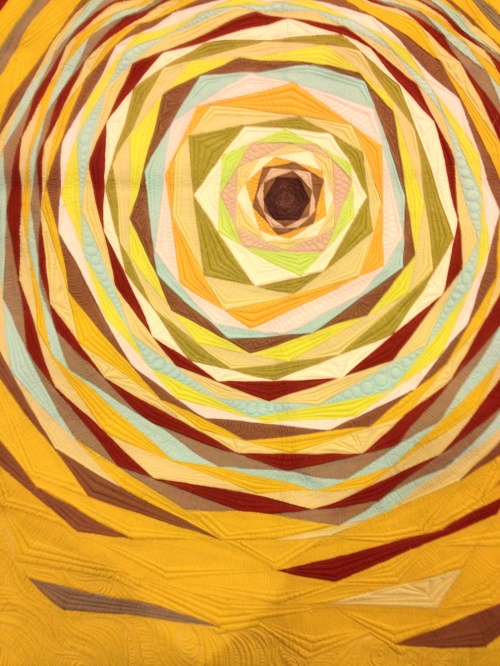 “Impracticality” Pieced and quilted by Angela Walters. Featured on the June/July 2013 issue of Quilter’s newsletter. Click on photo for free pattern.

Angela has written several books and has YouTube video tutorials. She has recently announced another book which will be available in April 2015 that she wrote with her 9 year old daughter about quilting with kids.

I am so excited about free motion quilting now and hope to practice on some smaller projects like tote bags or pouches. The smaller size will help me feel more comfortable when I go to quilt something larger – I think! I hope!

I have always defaulted to using my walking foot but I am encouraged to try something new. As I’m working I’m going to hear Angela telling me that echoing is my friend and that there are no mistakes that can’t be made to look better with more quilting. I’ve also found that using a coordinating thread color can make even a multitude of flaws look pretty darn good.

Thank you, Angela, for being such an inspiration and for sharing your love of free motion quilting with us!